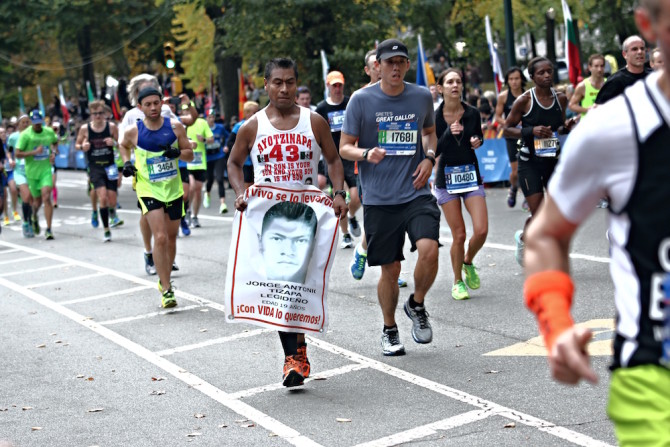 People run marathons for multiple reasons. Some fight cancer. Some fulfill a promise.

But for Antonio Tizapa, marathons are the stage where to take his fight for justice.

His son Jorge Antonio Tizapa Ligedeño is among the 43 students from Ayotzinapa that Mexican policed detained and disappeared on 26 September 2014.

“I found in sports a way to protest in silence,” Tizapa, 48, said. “What moves me are the words of my son. I remember him in his childhood. It’s something that gives me more strength to continue. And it’s a way to feel that anger, that helplessness, and overall the love you have for your son. Those are the feelings behind every race I run.”

And although Tizapa far from his family since 2000, he has found the support of other runners, mostly immigrants from Mexico like him.

“I’m not alone,” he said. “Several people who like running have been very supportive. To run a half marathon or a marathon you need a lot of discipline and a lot of willpower. And we have all of that. But we also have that big heart. And that big rage inside of us. Towards the Mexican government. So that’s our way to demand the return of our children.”