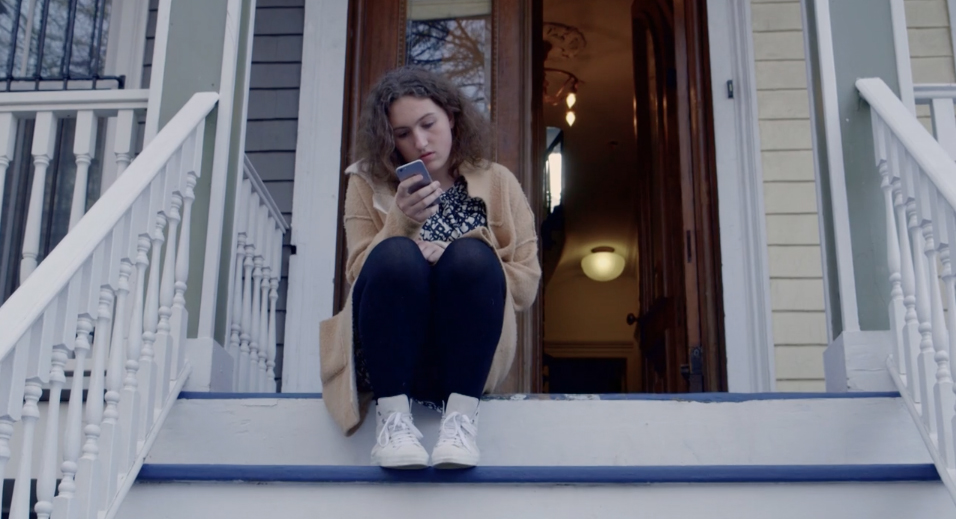 Hannah Zimmerman (16) is a passionate supporter of Bernie Sanders. She heads the High Schooler for Bernie Sanders and volunteers for the official Sanders campaign. She is also the only person in her family who supports Bernie Sanders—her mother and stepmother are avid supporters of Hillary Clinton, and her stepfather will vote for John Kasich.

It was a sunny afternoon in the Upper West Side neighborhood of Manhattan, and the students of the Fiorello H. LaGuardia High School of Music and Art and Performing Arts are rushing out of the brown doors of the school. Hannah Zimmerman, a sophomore, bursts out of the school with Belu Sarkissian and Christina Fidler.

Before they’re asked by the security guard to disperse from the school grounds, their classmates and friends stop the two students. “Can I vote in the primaries if I’ll be 18 by November?” asked one of them. “No, you can’t. So make sure to send five other people to vote instead,” said Fidler as she pointed to the “Vote Bernie Sanders” button pinned onto her school bag.

Zimmerman and Fidler are not just Bernie Sanders enthusiasts. They are founders and members of High Schoolers For Bernie Sanders, a national organization of high school students supporting Sanders’ candidacy. The organization organizes voter registration drives, issues initiatives in different schools and phone banking for the campaign. When the Sanders campaign comes to a city with a high school club, the field managers of the campaign connect with the members of the club and include them in their campaigning efforts.

“High school students have energy. That’s what is really important. Even though they can’t vote, they can do a lot of jobs that people with jobs and adult people just can’t do,” said Zimmerman, who has to wait two more years before she can vote.

Aside from running the organization, Zimmerman has been active in Sanders’ official election campaign in New York City. With money borrowed from her father, Zimmerman organized a benefit concert for Sanders’ campaign in March. The morning after the concert, she was at Sanders’ New York campaign and canvassing kickoff in Gowanus, Brooklyn. Although all of her free time is spent campaigning for Sanders, at home in Fort Green, Brooklyn, Zimmerman avoids speaking about politics.

A video of Zimmerman and Fidler canvassing for Sanders’ campaign in Brooklyn was released earlier this month. The two of them joked how they can canvass everywhere but home.

Zimmerman is the only person in her family who supports Bernie Sanders—her mother and stepmother are avid supporters of Hillary Clinton, and her stepfather will vote for John Kasich.

“My stepmother has actually banned me from talking about Bernie Sanders in the house and my mother just simply couldn’t care less. When I talk about Bernie it just sort of shuts her off, “ says Zimmerman. She adds, “It’s just sort of gotten to the point where everything that I’m doing and everything that I want to do I just have to do it for myself and do it with myself.”

Fidler, who turned couple of days before the primaries in New York, faces a similar challenge at home.

“My dad is going to vote for Donald Trump,” says Fidler. She adds, “But he said that he is proud of me for being engaged in the political process.”

Although visibly disappointed with the outcome of the primaries in New York, Zimmerman and Fidler did score personal victories—Zimmerman’s father and Fidler’s mother changed their preferences and voted for Bernie Sanders in the New York primary on April 19.

Transcript
I’m the only person in my family who strongly supports Bernie Sanders.
My mom and my stepmom have both told me that they are going to vote for Hillary.
My stepmother has actually banned me from talking about Bernie Sanders in the house and my mother just simply couldn’t care less. I talked about Bernie and it just sort of shuts her off. As soon as Bernie started losing, my mother suggested that I drop the campaign immediately and focus on something else.
So, it’s just sort of gotten to the point where everything that I’m doing and everything that I want to do I just have to do it for myself and do it with myself.
I had to give up so much for this campaign and if I wanted my mother and my stepmother’s approval I’d go work for Hillary, but I care about my beliefs more than I care about their approvals so I’m working for Bernie.