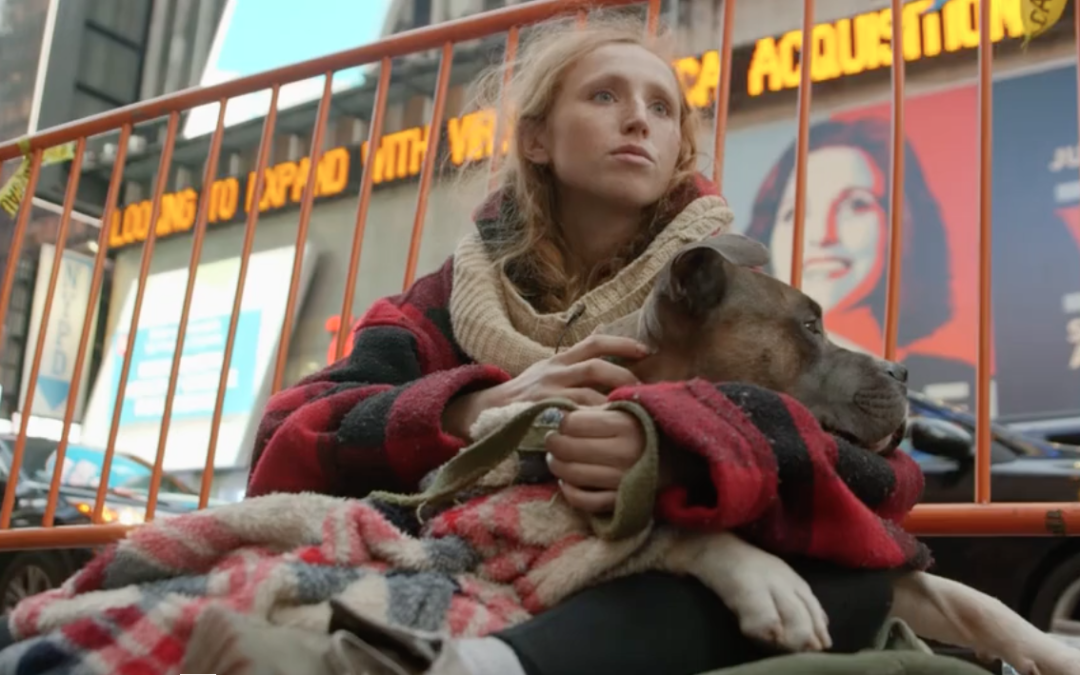 Alexa: A Story of a Homeless Youth with a Dog in NYC

Lack of employment, unaffordable education and family problems are some of the issues that 1,7 million teens have to face, throwing them into the streets. Finding a shelter is not easy, especially for pet owners. Except for one facility, Urban Women’s Safe Haven (UWSH) in Brooklyn — a shelter for domestic violence victims — any other homeless shelter in New York City allows animals.

The Rest of the Story:

Alexa, 22, is a homeless girl with a dog named Spike. For many homeless people, like Alexa, pets are more than just animals. In many cases, they are all they have and finding a shelter in New York City for them and their animal companions is not an easy, not to say, impossible task.

If homeless people give their pets to animal shelters, they run the risk of loosing them. If the pet is not adopted in the following weeks or hours, the are killed. Around 80% of the cats and dogs euthanized in shelters each year in the United States were healthy and treatable.

Not left with many options, homeless people opt to stay in the streets to keep their pets.

The non-profit organization Pets of the Homeless estimates that between 5% to 10% of the estimated homeless population – 3.5 million people nationwide – are pet owners.

Between 2014 and 2015, 17 states experienced increases in homelessness, and New York State had the largest increase (7,660 more people), according to the 2015 Annual Homeless Assessment Report (AHAR) to Congress.

Although different media have covered homelessness in New York City, there is little knowledge on the struggle that homeless youth and homeless pet owners have to face when trying to get shelter and keep their companion animals with them.

I left my home when I was young. I never knew my father. He was never in the picture. My mother has mental health issues.

I came from work one day, and my apartment had been broken in two. My boyfriend and I took the last of our money, and bought a van, and came back to New York. It’s just have been a lot more difficult than expected to gather the funds needed to get an apartment.

The hardest part is, I am never clean. Like, if you look at my hair right now, I haven’t showered in a couple of weeks. If you show up outside of Hard Rock Café to go and grab an application, and you haven’t showered in two weeks, and you have your dog, your boyfriend and all your crap outside, you know? No one is going to hire you. But my boyfriend works, he does craigslist’s jobs with the van that we live in…That really helps. But while he is working, it’s how I started doing this.

His name is Spike, have you ever seen the “The Land Before Time,” there is this big, fat dinosaur, that sleeps and eats all day long, named Spike Tail, and that’s why I named after (laughs).

I feel like he was plugged, like just for me. For me he came at the perfect time.

I don’t think I would be anywhere near as happy….

He is just improved my quality of life like in pretty much every way. Like if I am in a bad mood. If me and my boyfriend are fighting, we start talking on the dog, and the fight goes away. He is like magic, you know? Like, he falls asleep with us every night. and you know… he is like our world. He is like our little baby, you know?

He gives you something to focus your energy on. Instead of like focusing on all the shitty stuff that’s happening right now and the horrible situation that we are in, you know, we can put our energy in bring him a better life than what we are having right now.

He makes the situation better in almost every way. He is… just perfect, right? He is a really good boy.