The Jukebox Doctor by Alden Nusser 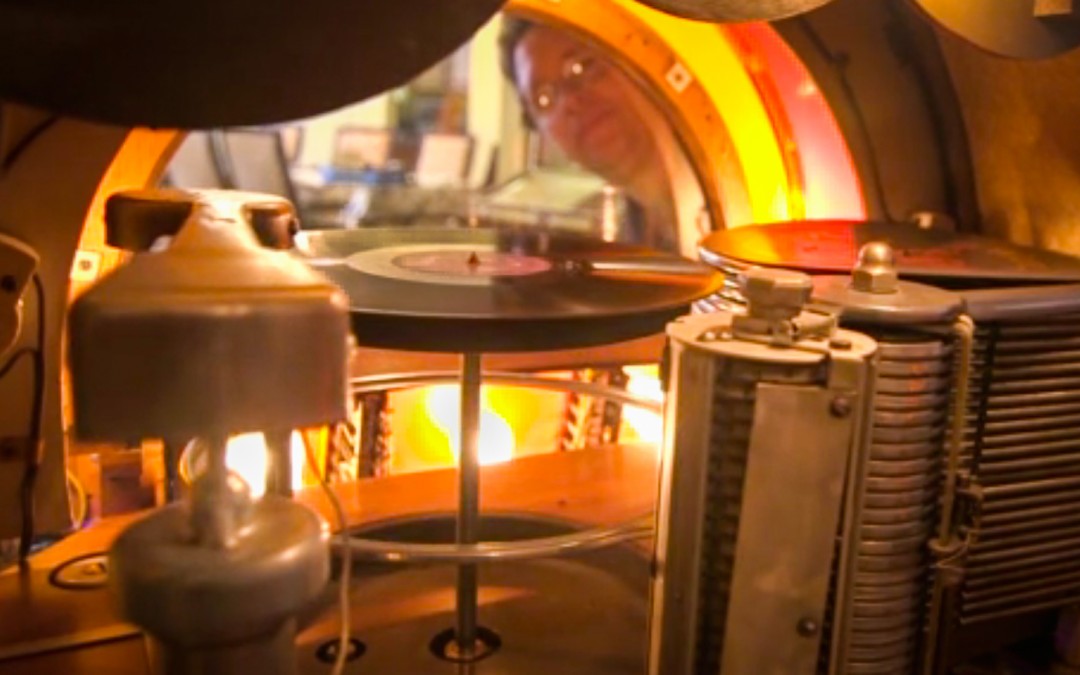 Perry Rosen is one of the last remaining full-time juke box repairmen in the New York area.

New York City’s last jukebox repairman is still in business.
Walking in to Perry Rosen’s garage in Sheepshead Bay, Brooklyn can feel a little bit like going back in time. About a half dozen antique jukeboxes line the walls, and there’s stacks of pre-digital gadgetry on every shelf and workbench in the room–old-fashioned gizmos with springs and motors, dusty gearboxes and rust-covered panels with missing fuses. There’s not a motherboard or a computer chip in sight.  When Perry Rosen began fixing old jukeboxes in the 1970’s, it was a hobby— he mostly repaired TV sets and telephones at the time. By 1998, it had become a career, and now he’s one of the few people in the United States who does it full time.  When he first entered the business, most service calls were to bars and restaurants, but these days, jukeboxes are generally found in the homes of private collectors. A majority of his clientele are baby-boomers, who, like Rosen, are drawn to the machines for their nostalgic appeal. “There was always something for nostalgia that’s been in my DNA,” says Rosen, who remembers being fascinated by an antique telephone he found in his kindergarten class in the 1960s. That appreciation for antique machinery extends to old cars, pinball machines and television sets as well, but it’s clear from the three jukeboxes he proudly displays in his living room that these machines are his primary obsession.  However, despite this passion– he can talk about jukeboxes for hours on end—there’s one thing about these machines he’s never been so crazy about.  When asked if he’s a music lover, Rosen responds simply: “No–I’m a mechanic.”

(Jukebox noises, clicks and whirrs). . . .
Perry Rosen: This is a 1967 Rockola Jukebox, I consider this to be my engineering degree . . . Ummmm. . . .I first got this when I was 16 and it wasn’t in working condition—it was missing speakers, I brought it back to my house, took it apart, and figured out how to repair it.
Okay you got what you needed out of this machine?
Alright, here we go. . .
I’m Perry Rosen and I’m one of the last people in the area, and the United States, who’s capable of repairing the mechanisms on all antique jukeboxes from the 1930s right up to the year 2000.
Alright, this is a 1959 Seeburg Jukebox– Here we have my 1941 Wurlitzer Jukebox,  This is a Wurlitzer model 1015 Jukebox This is a Nickelodeon— –the first machine to play stereo –and, uhh, the way it works, is uhhh. . .
(phone rings)
AN: Don’t worry about it.
PR: Let me get these phones off the hook here. . .Perry’s. . .Yeah . . . yeah I’m not gonna get there that soon, though.
(Perry gets out of his car, rings doorbell)
Jerilynn Safran: Hi Perry, how’ve you been. . .yes the Rockola’s sick. The Rockola’s sick, it’s been sick since New Year’s. . . It just kept spinnin’.
PR: Huh. . .looks like it might be the problem . . . ah, bingo. . . we have some action here.
JS: In the 1970s, very early 1970s, there was a song called “Palabras Palabras,” but the song itself was. . .could not find it, for love or for money. I wound up doing a search on the internet, and I found it in French. . .this is it. Yup, this is it! (Sing begins playing)
AN: So bring us back to that martini bar.
JS: It wasn’t a martini bar, it was a sleaze bar that we were having martinis in! But, um. . . it was a lot of fun, it was a lot of fun. . .
PR: Yeah, that was about as easy as it gets. I’m happy though, I didn’t want a major problem there where a motor or something has to be changed.
AN: How did you feel watching them danced, though, that was sweet.
PR: Yeah, that was nice.
AN: Do you often have situations like that?
PR: What just a blown fuse?
AN: No, situations where you get to them enjoy, their. . .
PR: I’ve seen ‘em dance, I’ve seen ‘em cry.
AN: So does that bring up any emotion inside you.
PR: Not really, it just makes you happy to be in a business that makes people happy. That gives people joy.  (music rises)