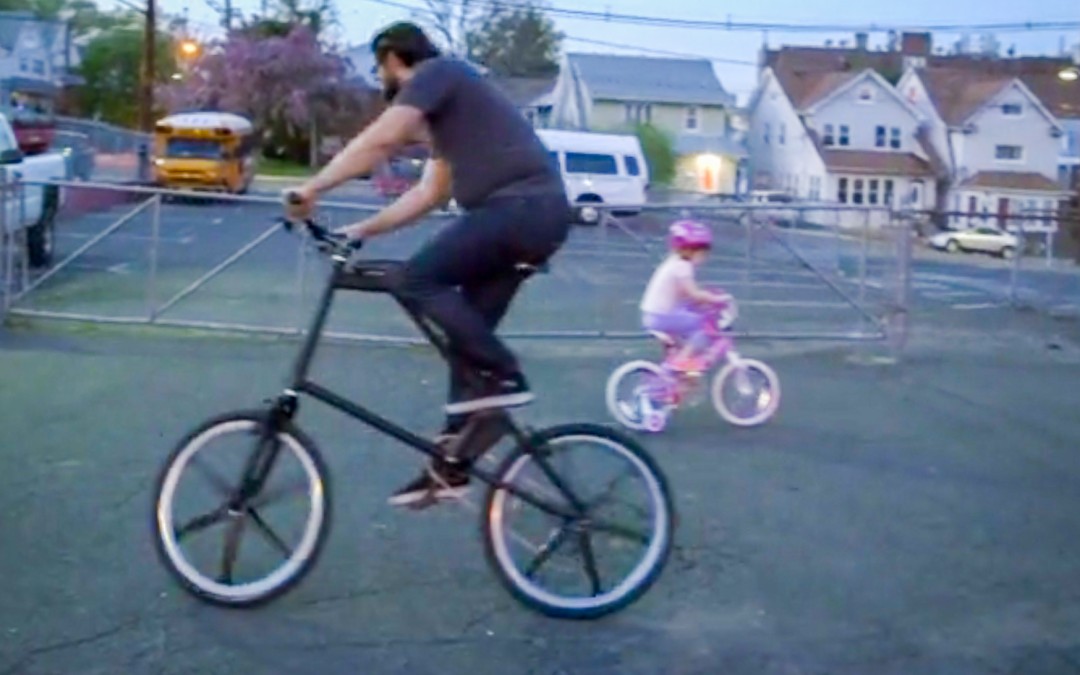 Who rides and builds freak bikes?
Guys who take bike frames and weld them together to make something freaky and something wild. The materials we ride can become who we are. Some drive a Hummer, some where boat shoes and some people build and ride colossal freak bikes.

Alan, Tom and Greg are all bike builders. They find refused frames and repurpose them, creating frankenbikes, or weird bikes, or, as they are most commonly called, freak bikes. For the guys, the bikes and process of building becomes an identity. Building is tinkering for Alan, Tom and Greg. This tinkering is a way for these men to make a mark on the commercial world: the “one-size-fits-all” culture that does not encourage building for yourself. Freak Bikes are a way of taking apart the distance that a consumer has from the materials he uses on a daily basis.
Freak biking is not without a couple of drawbacks. You are constantly shouted at. By riding the bike you become a public spectacle. This may be a good thing depending on whom you talk to. Some take the public’s reaction as a litmus test for whom they will get along with. Others are so overwhelmed by the emotional response from strangers that they just totally block them out. Greg installed a horn on his bike as a sort of catchall response to shouts from the streets.
Ultimately a freak bike is a symbol of “freak” person. Not as in the stereotype, gum-chewing pyro in the metallic spray-painted jeans, but as in an other. An other that is indefinably weird. Its not emo or punk or metal or dweeby but it is “freak.” Contorted and twisting metal rolling above the roofs of the cars.

Like anyone can build a fuckin bike, anyone can do that, but not anyone can look at five old bikes and then [fart noise] and then make this weird thing you know.
Its just the essence of bad idea upon bad idea upon bad idea makes it funny.
he first question off everyone’s mouth is how do you get up there? Second one is how do you get down? Third is woooo or just yooooo
yaknow, instead of being stuck in this 200 year old paradigm well, why don’t I design something that looks fuckin bizarre but still has the same functionality as that original design.
you’re like “holy shit, now I’m the magician” you know, I can pull this trick on anybody, all I have to do is make one of these things and then its not just one of these things, you’re making a bicycle, they are basically the perfect simple machine.
(This is the bike room)
there’s people who are like “who the fuck do you think you are riding in on that big fucking thing and gallivanting around” and other people are like “Oh my god, I’ve got to have that, how’d you get one of those, oh my god stop, come here, let me take a picture.
the “how’s the weather up there??” and Its like I don’t even respond any more cause its like, I’ve heard that thousands of times.
You can look into dumpsters better, you can like, you know, If you lived on the second floor you could get home faster.
why do it the same way. Why not explore something different you know. Why not do something that no one else has done. Why not try to come up with some that is original for fucks sake.
Nowadays it sounds stupid to call it a weird bike but there was a time when two evenly sized wheels with like two relatively straightforward interconnected triangle was really weird. It was like, whoa, what are you guys doing with that??
I guess really the true elation is riding, Knowing that you’ve really spent the time and energy in a dark room, grinding and really fretting over something and like making something work, like the time when you actually kick the door open and head out onto the street, it’s other worldly.
Imagine it’s late at night, and you’re super hungry and you’re really fucking stoned. And all you can think about is ordering some shitty pizza from Dominoes or something and all you can think about is the crust and the bacon and pineapple and all the crusty crispy juicy toppings, but then imagine if you could take all of that lust and hunger and ride it down the street (guffaws).