Pitching with the Pros: 10 things I learned from watching film makers pitch their projects for $

Some background: The documentary film makers  were all chosen in advance and all had strong stories. The film makers pitching to 3 people who controlled the purse strings at their organizations, (POV, ITVS and TFI Documentary Fund. ) The film makers requested funding from $15,000 to $250,000

Here’ s what I learned from the “purse strings“.

A few other tidbits:

They asked for interesting stories that are “quirky.”

If your film is difficult to watch or has unlikeable subjects (heroin junkie prostitutes—which are actually terms the we use to separate ourselves from people), how do you avoid having the audience turn away? They suggested to show off the characters as human & individuals. Have small payoffs, small successes in every act.

Make the sample reel about the story.

If you have multiple characters, focus on the main arc with the “A’ character then describe how their stories will intersect.

The film makers had 20 minutes total: 10 minutes to pitch (they all showed a short sample reel as part of their pitch) then  10 minutes for the “purse strings” to ask questions and offer feedback. One of the purse strings said “You should be able to explain your film in 2 seconds” (!) so make sure you can break your story down into one sentence that’s compelling.

They were pretty excited about Mapping Main street, a collaborative Public Radio project online, so I’m off to check that out next.

Wow, this is where we’re heading for news

from point and shoot camera or iPhone to the web (and perhaps to broadcast news) in less than 30 minutes. I have seen the future!

Philadelphia photojournalist and videographer Jim MacMillan has an idea to use his smartphone and his small point and shoot camera to cover breaking news and features, automatically upload them to his website and send out tweets to news stations to alert them to new material. My only problem is that his prices seem, well, a little too low .

Best part is that in the spirit of transparency, he tells you exactly how he does it. Awesome!

“Let the story move you before you move the story”

A couple of lighting techniques videos

Deconstructing a lighting set up, by Still Motion.

Opposite Ends or the Same?

They’re both about cellphones and neither has a narrator. One is short; one is long. Both made me stop and think a very long time. That’s what web video is about.

I’ll list them in the order I saw them. The first by Werner Herzog for a large advertising agency.It scored almost 2 million view in the first week for what is basically a PSA (Public Service  Announcement)

The other written and starring Charlene deGuzman, a young actress, has a simple narrative arc and is pretty minimal.

I love that web video can encompass both of these projects.

A Crew of Two with a Ton of Still photos too

You’ll be doing your first assignment in a crew of two.

I’ve worked alone, in a crew of two and in a larger crew too. For me, two is the perfect number. I’d always rather work with someone else than by myself.

Here’s a nice story done by two people, with a nice reflection at the end too. (check out the backstory link below the video)

Heres hoping your story will be as tight, tidy and nice as this one.

What makes a good video story?

A great video story  unfolds, in real time,  and the visuals tell a story. (The web is a visual medium, otherwise the SONY Walkman would still be the device of choice.) Also, since it’s the World Wide Web, a great video story can go viral even if you don’t speak the language if there’s a compelling story told in the visuals.

Here’s a great example: the climb to the top of a 1,768 foot transmission tower as seen through a technician’s helmet camera. You don’t need any hysterical narration here. As a matter of fact, you don”t need any narration at all (though I’d love to hear from the guy making the climb, what he thinks while he’s on his commute, etc) 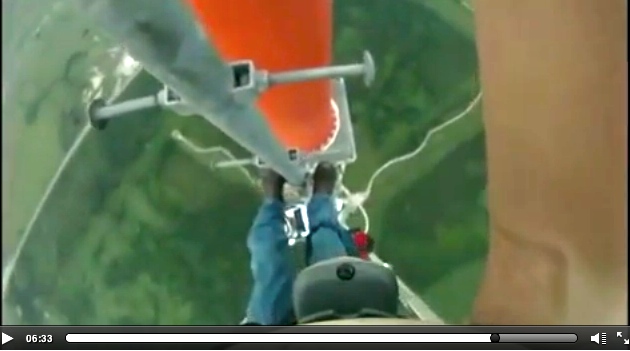 And here’s another similar video with literally breath taking visuals. Ironically, I think the second camera viewpoint stat at 2.00 minutes is even scarier.

What you lookin’ at?

There’s been some discussion recently about where an interview subject should look during an on camera interview: to the left, to the right, straight into the camera?

Like so many things in storytelling, I like to look to real life as my guide. For instance, I hate when I’m at a party and the person I’m talking with is looking over my shoulder, to their left, everywhere but at me. Makes me think they’re not interested in what I’m saying.

I recently went to a preview of a documentary about a famous NY restaurant owner. My partner, a food writer, and I went over to talk with him at the press party. That man never took his eyes off of us, even though I knew there were more important people at the party. I came away feeling he was genuine (and I wanted to learn his trick of how do you look over someone’s shoulder without them seeing you do it?)

Ultimately, it’s a creative decision. What do you want your story to say to the viewer?

In this piece from Apple (which reminds me of this perhaps even more powerful piece done by Errol Morris in the same style) the subjects look right at the viewer.

A nice behind-the-scenes story and links set of films from Steffan Hacker, who is working to make boring stories interesting as a multimedia producer at Tuft’s University.

Brilliant in every way: a cool multimedia package

[editors note: this is some of the smartest interactive storytelling in the online world today. AND it’s government supported…ok, it’s the Canadian Government..bob sacha]