Retired from Walking: Navigating NYC in a Wheelchair by Alyssa Pagano 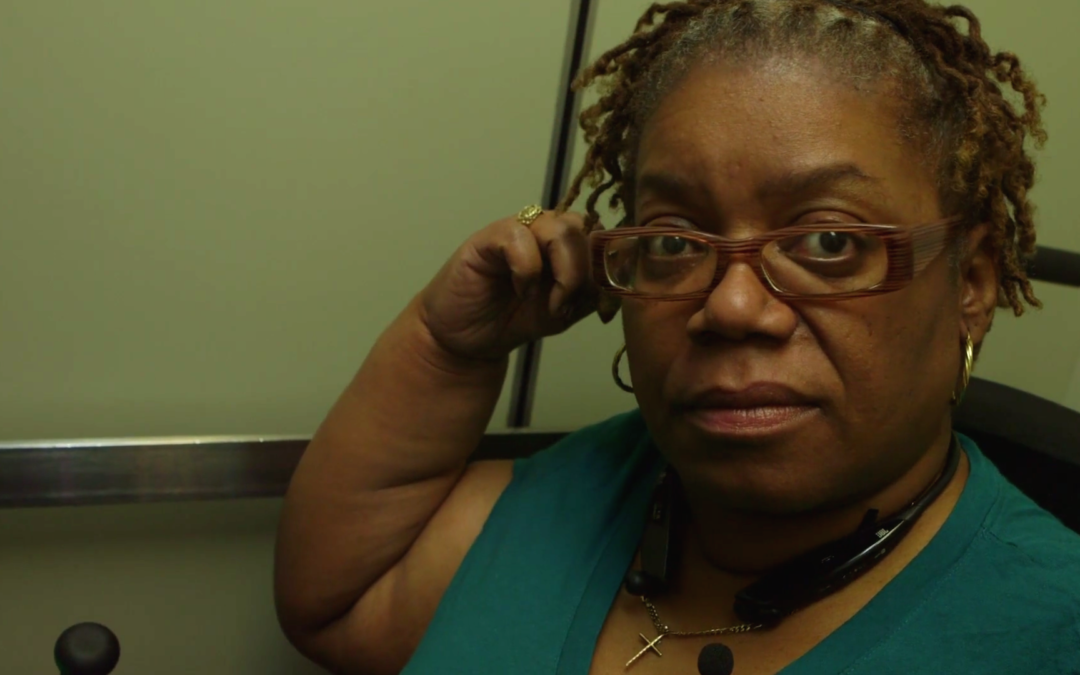 Vernita Worrell retired from walking when she was about 25. At 56, she can no longer walk, so she navigates New York City in a wheelchair. She regrets that she stopped walking but it doesn’t stop her from getting out into the city every day.

The main thing Vernita Worrell would like to change about the public transit system in New York is the attitude of the bus drivers.

Worrell uses a wheelchair and has had bad experiences when bus drivers wouldn’t allow her on the bus, or were rude while securing her chair.

Over 550,000 New Yorkers have an ambulatory disability, meaning they either use a wheelchair or have trouble walking without assistance of some kind. Only 88 out of the city’s 469 subway stations are accessible by wheelchair.

Worrell lives near an accessible station but she avoids taking the subway because she’s afraid of her wheels getting stuck between the platform and the train. Instead she prefers to take the public bus or Access-A-Ride, which she calls “Ac-Stress-A-Ride,” because it requires 24-hour notice for pick-ups and doesn’t always show up on time.

Despite these challenges, Worrell gets around on her own. She lives on the Upper West Side in a wheelchair-accessible building with an elevator and works out at a gym for people with disabilities.

Worrell had polio as a child. She now has post-polio syndrome and can’t walk anymore as a result. For a while she used crutches, but would fall sometimes and had to wait for someone to help her up. She didn’t like that she had to wait for help, so she decided to stop walking. Although she regrets giving it up sometimes, she embraces the mobility her motorized wheelchair gives her. Now she says she doesn’t want anyone pushing her in a mechanical wheelchair.

“I just want my motorized wheelchair so I can get around on my own- be independent,” said Worrell.

TRANSCRIPT:
People say if you could have one wish what would it be and my wish- it would not be to walk.

When I see able bodied people, they’re stressed and they’re mean and they’re a lot of hateful people and stuff like that.

Let’s go. You keep on saying it’s warm outside, but I’m cold. I have to turn off the light. I’m sorry.

Sometimes people think when I go, ‘excuse me’ I think they think I’m gonna ask them for money, so they’ll keep on walking and I’ll go ‘excuse me could you hold the door open for me?’ and they walk so far away before it registers to them, she didn’t ask for a dollar she asked for the door to be opened or something like that.

That’s why I try to stay in places like this gym I’m trying to get to. You know, all of us there are disabled so, you know, so we’re in our own little world there.

About two weeks ago, we was at a mall actually, so you know you got a lot of people trying to get on the same buses with their packages and stuff and the driver- I don’t know why that driver didn’t want to put me on the bus. He was talking about his back and stuff. If your back hurt, you should be where I’m at. You know, but anyway life goes on. We just waited for the next bus. But I was very upset.

I’ve been disabled all my life. You know, I was on crutches. I kept falling. And it was hard for me to get up and people weren’t helping me up as quick as I wanted them to so that’s why I said I retired from walking.

And I regret it but it is what it is.

Because if you don’t use it you’ll lose it and once you stop walking, now I can’t walk, at all you know. And nobody told me that.

Hi sweetie, how are you?