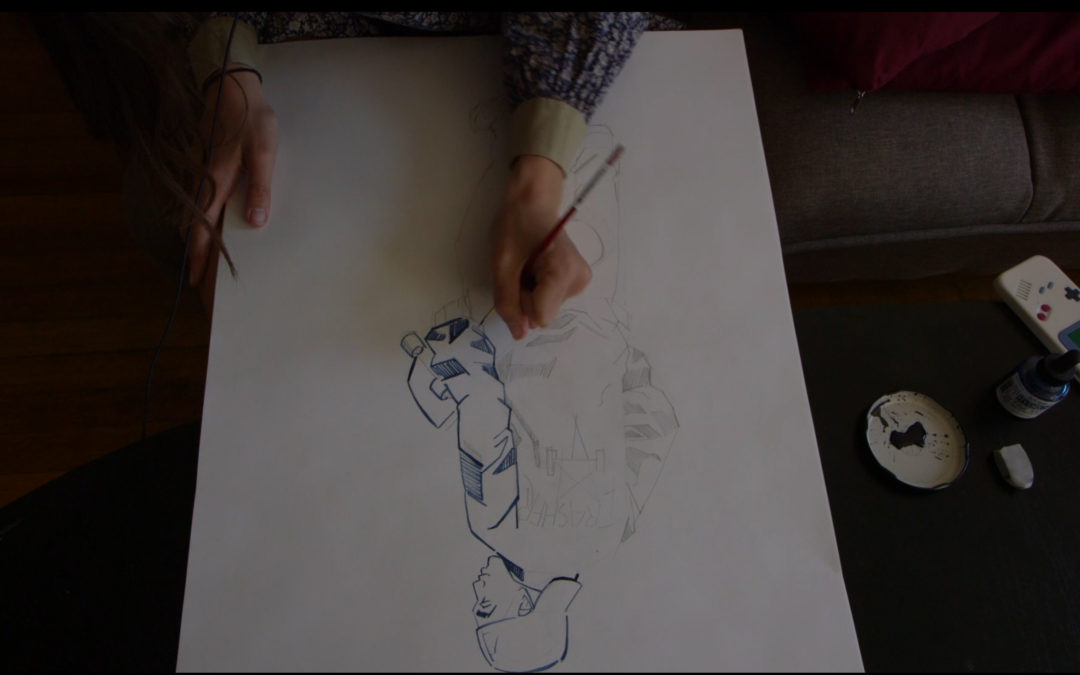 Rachel Merrill has been reading comics since she was a kid. Starting from Japanese manga and moving onwards to classics like Neil Gaiman’s “Sandman”; Merrill has always found inspiration for her art through comics. She plans on making more in the future, but sees and hears what kind of abuse and neglect women in the comics industry face.

In December 2015, Tim Hanely, on BleedingCool.com, used both pie and bar graphs to illustrate the percentage of women working for the two biggest comic book companies, Marvel and DC. While he writes that the numbers are improving, they don’t look too promising. As of Dec. 2015, woman creators at DC made up only 15.2% of the creative staff. At Marvel, it’s even lower, with the number being 14.4%. These numbers come in a year where at the Denver Comic Con, a panel titled “Women in Comics” took place, with not a single panelist being a woman.

Superhero content is no longer niche form of entertainment. Superheroes are dominating film, popping up in new broadcast and premium cable shows and are some of the most popular shows on Netflix. While on film, we have a Wonder Woman film coming; television has Supergir”l and “iZombie”; Netflix has an acclaimed series with “Jessica Jones,” diversity is making strides in forms of visual media, but not in the format on which all of these series and films are based on.

We talked to two veterans of the comic book industry, Regina Sawyer, founder of her own independent comic publisher and Alison Wilgus, an independent comic book artist. We also follow Rachel Merrill, a freelance fashion artist and illustrator who has seen her style become more like the comics she read in her teenage years. Falling back in love with comics after a terrible experience in college, we film her drawing a man she encountered on the street one day. Women are always judged that they were feminize male characters or they can’t draw them at all. Rachel shows us here, that they can.

Transcript:
RS: Theres always a doubt on how good you are. At the end of the day the person who does the best job should get the work but also you might be xing out wonderfully qualified women the chance because they are women.
AW: I mean heres the thing and I am not everyone agrees with me, this is my personal perspective on this, I’m definitely in the “well is poisoned” camp.
RS: Last year Denver Comic-Con had a panel titled ‘women in comics’ when audience members went and expected to see at least one women on the panel they saw all men. They also asked them about female readership and they said girls don’t really read comics. This is 2015.
RM: It doesn’t surprise me.
I got out of comics for a little bit in college because every dude wanted to do DC/Marvel. We had teachers male, white teachers who would just tell you how to draw how exactly like that style. It could be a very inclusive boys thing.
RS: There is definitely a fear factor. There’s a fear of number one, if you with those companies or any company for that matter, that you’re working for You don’t want to seem your bad mouthing anybody. You’re getting a paycheck, you’re making a living, you’re taking care of yourself or you’re taking care of others, as well as yourself.
AW: I know women who work at Marvel who think half of the books they have there are disgusting. But they will tell me that over dinner, but they just don’t talk about it over social media or they talk about indirectly. There not going to risk their not even that great job thats paying their rent.
RM: There’s nothing so special about a man’s view that means that he’s entitled to only to get to tell his story at the expense of others.
Eventually their audiences are going to get older and fade out and look at the Republican Party you know like eventually their constituents are going to start to fade away
Because other people who want to be apart of the culture at large don’t see themselves represented
So you’re shutting out a bunch of potential customers because you are so specific in what stories you deem acceptable or good to tell
And progress just takes time unfortunately seems like theres more talk about it. hopefully the talk doesn’t go away. if you keep being annoying about it hopefully.
Just because you make progress doesn’t mean its done and its going to continue on its own.