Puppy Party: Getting Your Bark On – By Victoria Edwards 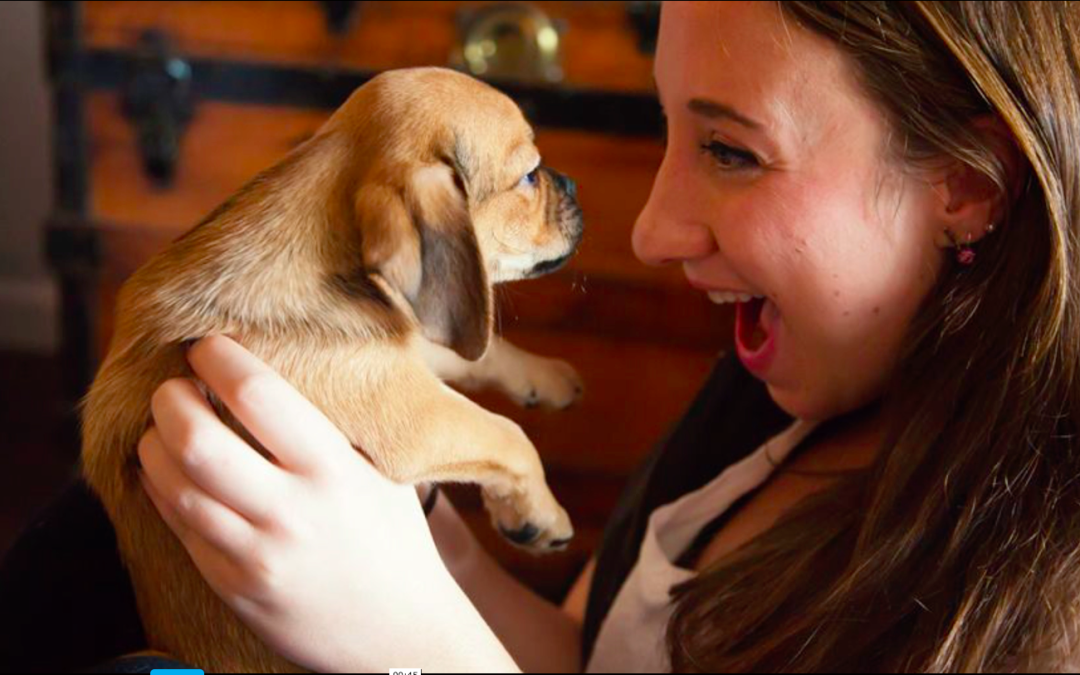 Brief: David Dietz has always been involved in the pet business — he took over a dog grooming and pet store from his brother in law years ago. But 15 years ago he went from being involved strictly in the pet business to marrying it with the entertainment business with his “puppy parties.” Now, 15, years later puppy party is its own business and they are booked months out.

Long: Puppy Party Founder David Dietz said he stumbled on the canine parties as a bit of a fluke – one of his grooming clients was a nurse and she was taking care of a terminally ill patient whose last wish was to pet a puppy. Dietz who owned a pet store and grooming business got clearance from the hospital to bring a puppy in to play with the child, and soon other nurses were requesting the dogs’ company and puppy parties was born.

Dietz said that puppy parties are the first of their kind. And they are a great way to socialize the dogs and teach children about how to take care of them. Still, Dietz said puppy parties are not limited to children: over the years puppy parties have entertained at bachelorette, birthday, corporate and hospital parties and has even done trade shows. Dietz said his favorite part of the events is watching the animals’ interaction and connection with the people for the hour of the party. One child got so connected to the puppy that he locked himself in his bathroom and the parents had to unhinge the door to get him out.

Now he said his company has more requests than they can fill and puppy parties is booked for multiple months in advance. Still, although Dietz loves the puppies and the parties, he tells viewers a secret about which animal is his favorite: hint, it’s not puppies.

Transcript:
We open up the door and tell the children, ‘Step back.’ And allow the puppies their room. And as one puppy comes out — the bold one.

WE usually name that dog right away, Dora. . For the explorer. And that dog starts roaming around. The other puppies see what he’s doing. And they go, ‘oh, that looks like fun!”

And then they start sticking their nose out of the cage. And I tell the kids: Just wait

They’re going to come out. And they slowly come out. And all of the sudden they build up their excitement and the puppies and they go, ‘wow, I can jump over somebody’s lap. Somebody’s going to hold me. ]

So, 15 years ago it started. We called it puppyparty.com

Nobody in the world did parties with puppies to provide them as entertainment for kids or for adults. And what happened was about 15 years ago we had one of our grooming customers was a nurse and worked in a hospital and say ‘hey, we have a child who’s really ill.

David, is there anything you can do to make this child happy?

His last request was to pet a puppy. Can we do that?

And I said well, I have no problem with that. I would love to help this child. Is it OK with the hospital?

She called us the next day and she said the hospital agrees, everyone wants to have this puppy. [
We brought the puppy into the hospital. The next day. The child was crazy, loved it. And even the people around him were happy to be, um, petting them
And to be getting love from this cute little, adorable, affectionate puppy.

What’s strangely happened was a week later the nurses started to call us and say, ‘hey, can you bring it to my house?’

Can you do that?
And the idea was born
And I said ‘hey, let’s just do puppy parties and see what happens.

To people. And we have more requests than we can manage with them. And that’s how puppy party started. And to this day, now puppy parties have now joined the ranks of big business.

And we’re doing bachelorette parties, corporate hospital parties and even trade shows so um it gets a double benefit for the puppies because they go in, they get trained, they get played with

And if you bond with that pet, and you qualify for a home, you’re welcome to take that pet home and save his life.

But I do have two cats: on there. Actually I love cats a bit more than I love puppies
SHH

It’s a secret. Don’t ‘tell anybody

Looking for a birthday party treat? Check out #puppyparties in #Brooklyn. Dress up these pups: https://t.co/r7Lbzv6HrT