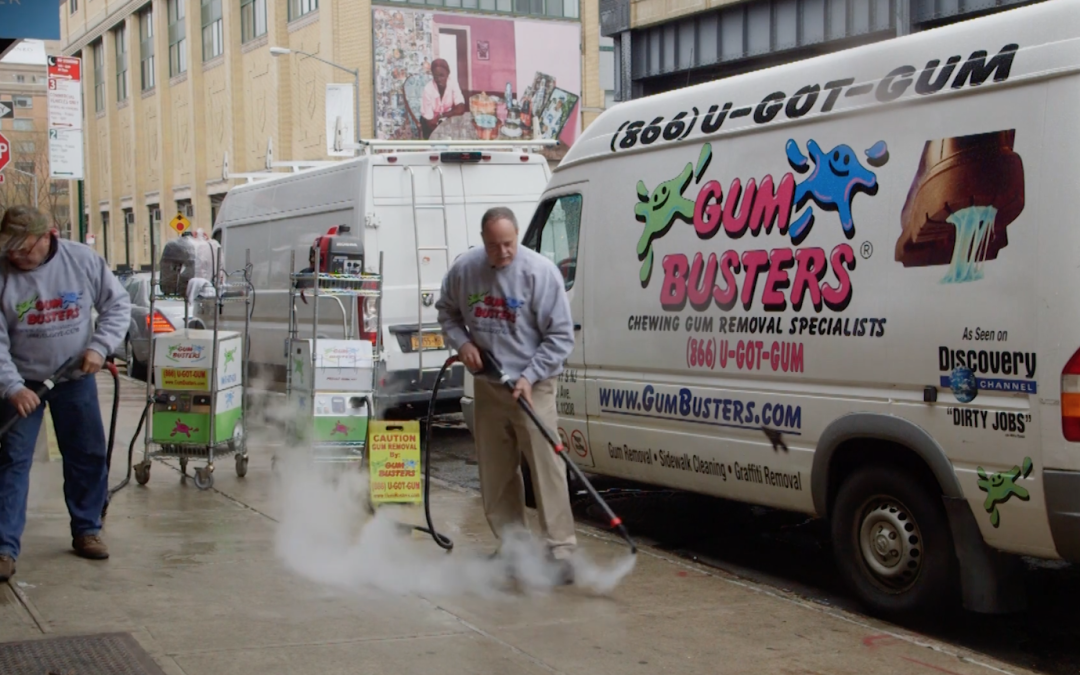 Anthony Mule, a former transit worker realized that gum plagues the streets of NYC and decided to capitalize on it.
The CEO of his now 16-year old company, Gum Busters, thinks that there is a gum pollution problem. The company works out of a warehouse in the East New York section of Brooklyn.
Jobs ranging from sidewalks in front of businesses to the floors of the Empire State Building have been on the company’s to do list.

Mule who has a business degree from Baruch says his father who was a fish retailer inspired him to be such a hard worker. The machine made in Holland uses 300 degrees of steam and a safe solution and vaporizes gum in seconds.

Gum Busters sell their steam machines for about $6,000 and don’t openly discuss their cleaning rates but prices vary based on space.

Mule and his company have been featured on Discovery’s Dirty Jobs with Mike Roe and CNN. On his free time he enjoys fishing. His father who he says showed him from very early on what working hard meant was in the retail fish business. Gum Busters employs a few people and acquires temps when working on large projects. The largest job Anthony says was in Yonkers where they worked from morning until night scraping thousands of old gum stains.

People (business owners), he says spend so much time keeping the interior of their business and neglect the exterior. Meanwhile, the exterior is the first impression people get of ones place.

The special Gum Busters machine uses 300 degrees of steam that not only can exfoliate old gum stains, they can remove grease stains on stoves and scum on shower walls. Gum Busters not only cater to gum, they specialize in graffiti removal, home and restaurant cleaning. The company has a new machine coming out soon that doesn’t require electricity, making this the perfect tool for MTA subways and buses.

So the next time you want to get rid of those black gum stains, who you gon’ call?

50 million pieces of gum are chewed every single day and they all end up in the same place.

My name is Anthony Mule. I own a company called Gum Busters, and our specialty is gum removal and graffiti removal, sidewalk cleaning.

We are freaks when it comes to come.

People are not aware that there is a gum problem, a gum pollution problem.

And that’s because people tend to spit out their gum whenever and wherever it loses its flavor.

I worked in the transit industry and one of the biggest problems we had was gum removal and we found this company and ended up buying into the system.

Had you asked me uhh when I was growing up, what I would be, I would never think I would be a gum removal specialist.

But uhh in this environment, in this day and age there’s a business for everything.

It is it is disgusting I have to tell you.

(NAT SOUND) We got water in here Joe.

When you heat up the gum on the sidewalk you can actually smell and you get a woof of the flavor of the gum. You can tell whether its spearmint gum or peppermint gum.

(NATSOUND) Were going to be bringing other equipment as well so were going to clean everything nice for you.

That gum is gone.

Well people ask where does the gum go. The gum is basically pulverized and vaporized because of the 300 degrees of steam and the detergent, it just breaks it up into such tiny granules.

That gum is gone

When you got thousands of pieces of gum you know you can be there for 6 hours or you know 7 hours, take a whole day to clean a sidewalk.

But once we’re done there’s a satisfaction, that we have to say wow, look at this sidewalk and look at the way it was before.

I chew gum probably everyday but I spit it out responsibly.