The Horse Vet from Luke Tress. 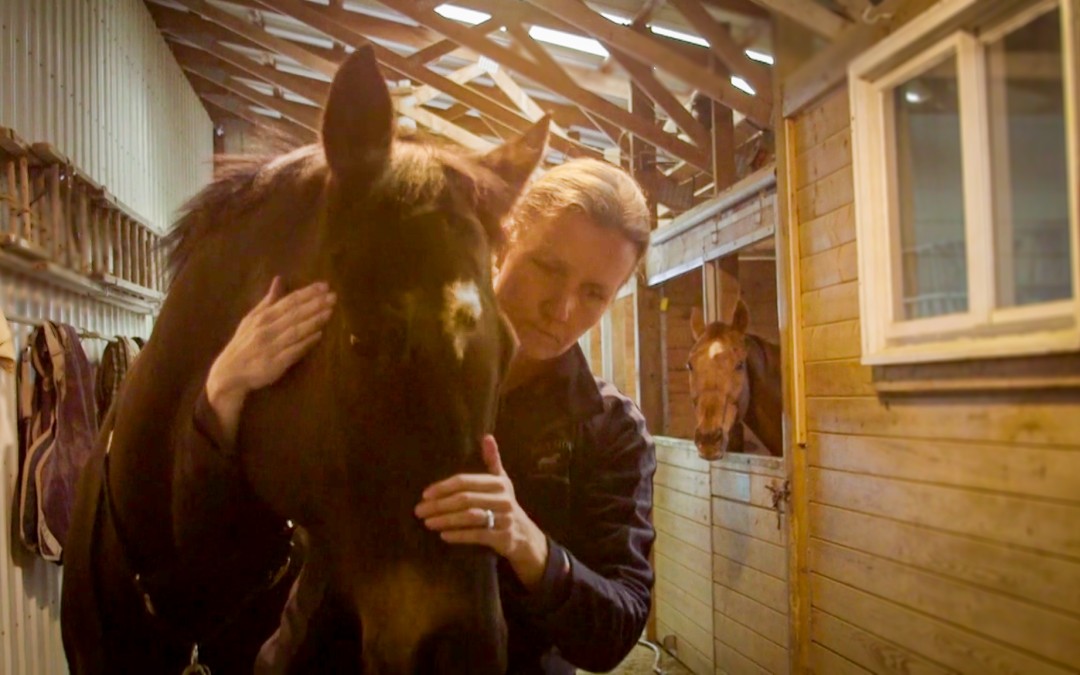 Carol Vischer is the owner of Northeast Performance Equine, a veterinary business focusing on non-traditional treatment for horses. She uses acupuncture, spinal manipulation, and electroshock therapy to treat problems and try to prevent them before they become serious. She moved to the United States from Belgium when she was 12. She didn’t speak English and found a connection with horses. She has been working with animals since. Horses are not designed to be ridden, she says. In the United States, horses have significant problems because many owners do not care for them properly, and because American breeders are less knowledgeable and experienced than European breeders. In the US they tend to breed for aesthetics more than good genes which can lead to health problems. She adopted acupuncture after using it to treat one of her own horses who had eaten a poisonous weed. She says the horse would not have survived without the treatment. It is an unconventional treatment but she is convinced it is effective. “Acupuncture is a little bit of a difficult concept to understand when you’re Western trained medicine, because it’s not black and white, proof, disease clinical sign treatment,” she says. “It is a more thinking of energy movement in the horse, rather than symptom, disease, treatment, the way want to categorize everything in categories that are neat in Western medicine.” She regularly works with the same horse for over 10 years and says building a trusting relationship with each horse is crucial for her work.

The nice thing about horses is, unlike people, they don’t lie. They tell you exactly how they feel, if something feels good, if something hurts, they’re honest about it. Horses were never designed to be ridden. We put them in stalls, we don’t allow them a lot of time outside on grass, and then we expect to ride them. I always liked horses, but when I moved to this country, I was 13 and I was lost, couldn’t speak the language, horses kept me sane I guess. And from then on I knew that that’s what I wanted to do. I always knew I wanted to be a veterinarian but that’s what told me I wanted to become an equine veterinarian. The combination of acupuncture and spinal manipulation opens up a whole new world of looking at horses, because it’s not black and white, proof disease clinical sign treatment. It is a more, thinking of energy movement in the horse. I think he’s worried about his teeth, his mouth. I’m not gonna do anything with your mouth I promise. I know, you’re worried about your teeth. This horse is really really good and he trusts me, and he trusts his mother, his owner, implicitly. I know sweetie I know you could feel that one. I get it I totally get it. Most of the time, not always but most of the time when I work on a horse I make them feel better, and even if the horse is initially skeptical because he hurts, very quickly, usually within 5 to 10 minutes the horse realizes that I’m trying to help. You really are pretty amazing. Don’t ever diagnose anything. Very often people get close minded, and then they make mistakes. And I have learned that because I have made that mistake too. I would look at a horse and say oh, it’s got bla bla bla, and I would try to treat it for bla bla bla, and it wasn’t like that at all. If you diagnose something, you stop looking.