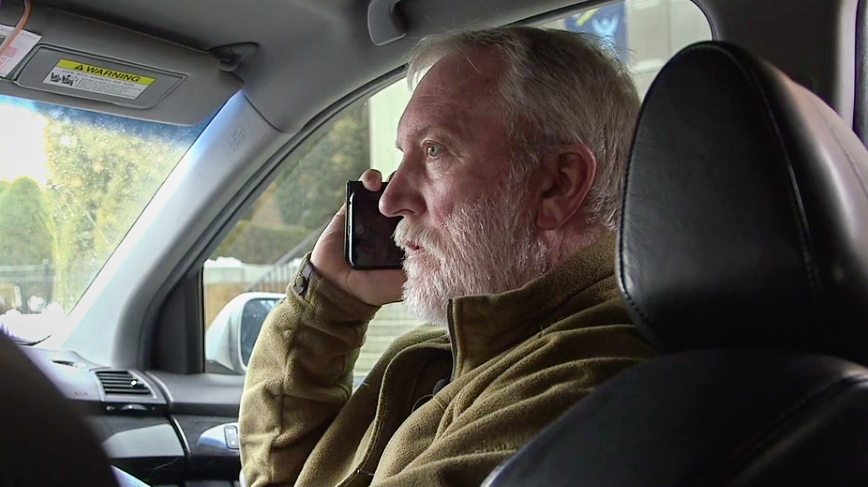 Private investigator Michael McKeever has handled thousands of cases since 1977. He’s a modern-day Philip Marlowe in a changing industry, and he handles three kinds of cases: infidelity, locates and real estate and insurance fraud.

In the summer of 1977, Michael McKeever moved back to New York City for filing paperwork for his classmate’s father, a private investigator in Brooklyn. Thirty-eight years later, he remains a bastion of boots on the ground detective work in an industry that become increasingly digitized and corporate.
McKeever’s grandfather was a beat cop in the ’20s and ’30s, and his dad had made detective before baby Michael could crawl. But McKeever veered from this family vocation after reading a book called Bligh, Private Eye. (He later worked briefly for the author.)
“I didn’t think I was cut out for dealing with the grisly side of life,” McKeever, 60, said during a recent steak out.
He broke into surveillance work nearly four decades ago when other P.I.s refused to sit in parked cars at night because, like everyone else in New York, they feared a serial killer. 1977 was the Summer of Sam, when David Berkowitz gunned down young couples in parked cars..
“The city was a lot rougher then, for a long time after that,” he said. That summer, he saved up enough money to rent a small apartment in Brooklyn, he said, but it was burglarized three or four times in as many years.
McKeever said he earned a reputation as a surveillance specialist over the years. Toady, he still works predominantly in the five boroughs but has chased cases in far-flung cities such as far Miami, Los Angeles and Paris, among others.

I do think it’s in our DNA to wonder about that, and I think it probably has to do with, you know, is this person feeding another family? Is he out there hunting and bringing back the game to another cave?

Mckeever. ok, if you wanna call me later, I can accommodate you.

My grandfather was a cop in New York in the like the 20s and 30s. He came from Ireland. Then my Dad was a cop. He came back from World War II, and he soon after became a detective, which when I was a kid was the coolest thing for your dad to do.

And then when I graduated from college I thought about it, but I didn’t think I was cut out for dealing with the grisly side of life.
Basically I always say with skip tracers, they’re guys that like bullshit people from morning, noon and night. Why do you think they’re not going to be bullshitting you?

Well, it’s a curious fact of the private eye biz that if a woman hires you, she’s 90% accurate in her… her question. If a man hires you it’s only about 20%.
TEXT: McKeever also surveils fraud cases and locates missing people.

I’ve had people come down and start slugging their spouse and things like that. I’m not fomenting violence. It’s like whatever happens happens. It’s not up to me.
McKeever shares an office with a therapist in Manhattan.
It’s not like it seems on TV when, you know, you have that girl with the buddy holly glasses and the red hair in her office just banging out all this intel.

If somebody runs away from home and they end up in Portland, Oregon selling peanut butter sandwiches at Phish concerts, you know, you’re not going to find that person. They’re just kind of out there.
I had a case with this guy… kind of an everyday fraud.
So he had woman killed, and when the kind of inept hitman went back to kill the other woman who was like the bookkeeper—it was on the peer in Manhattan, the west side, they used to park cars over there—she screamed and these guys went to help her and he killed those three also. So now it’s like this major dragnet.

You know, I’ve had a few cases that really kept me up at night. And people don’t pay any extra for you to be that way, when you’re emotionally involved. It can just really be draining.
There’s like a feeling of empowerment if you find out that someone you don’t trust is up to no good, and you’re getting that information—which I think sometimes encourages people to keep going even though you’ve gotten your answer.
It’s hard to figure out. People are like snowflakes I think.